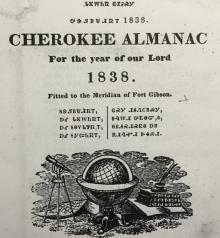 On August 21, 2017, a total solar eclipse will be visible in Cherokee, North Carolina.  Cherokee people observed eclipses for millennia, and have several names for them.

The oldest is “Nvdo walosi ugisgo.”  The literal translation is “Sun/moon frog it-eats-the-round-thing-habitually,” or  “The frog eats the sun/moon.”  This refers to the traditional belief that the eclipse is caused by a giant frog swallowing the sun or moon. To scare the frog away, people made loud noises for the duration of the eclipse.

James Adair was with the Cherokees in 1736, during a lunar eclipse.  “During the continuance of it, their conduct appeared very surprizing to one who had not seen the like before.  They all ran wild, this way and that way, like lunatics, firing their guns, whooping and hallooing, beating of kettles, ringing horse bells, and making the most horrid noises that human beings possibly could. This was the effect of their natural philosophy and done to assist the suffering moon.”

Other American Indian tribes and people around the world had similar traditional stories and beliefs.  The Chinese believed a dragon was eating the sun, and the ancient people of Scandinavia believed wolves who lived in the sky chased the sun and moon and sometimes caught them and began to devour them. Traditionally, they made noise to frighten them away.

Another Cherokee name for eclipse appears in the Cherokee Almanac of 1838, printed at Park Hill, Indian Territory. This year included a lunar eclipse and a solar eclipse, as well as the forced removal of 15,000 Cherokees from their homeland in the southern Appalachians.

At this time the word used for eclipse was simply  “Nvdo Tsulisihvsgiyi,” literally translated as “Sun/moon it-to-be-dark-more-than-once-time/place,” or “The time when the sun and moon get dark.”  The Almanac was written by the missionary Rev. Samuel Worcester and printed at his direction, so perhaps he did not want to refer to the older, pre-Christian myth of the giant frog.  Or perhaps Cherokees also used this more direct descriptive word as well.

James Adair, The History of the American Indians (1775)

James Mooney, Myths, Legends, and Sacred Formulas of the Cherokee (1900)