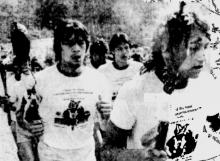 Cherokee language includes six different verb roots for running.  Each one can be conjugated into more than 240 forms, using ten persons and twelve tenses, positive and negative.  They include:

I am running away = galiti’a

I am taking off running = gadanawasdiha

I am running over something =  tsiyatso’vsdiha

In the 1700s, Cherokee men ran everywhere.  If they were not going somewhere, they were playing the chunkey game, gadayvsdi, which James Adair called “running hard labor all day in the sun” (1776). One Cherokee man ran three hours alongside a galloping horse, observed William DeBrahm, architect of Fort Loudoun (1756), covering more than forty miles.  When Cherokee men ran footraces with British officers, the officers won in the sprints, but the Cherokees always won at any distance, according to Henry Timberlake (1762). Letters from the British Army show that the Cherokees, when called to go to war, covered hundreds of miles in just a few days, showed up at the appointed place, and had to wait weeks for the British Army to arrive, much to the Cherokees’ frustration.

Today the Tarahumara people of Mexico still run hundred-mile races through the mountains, so we know this is physically possible–not just a legend- if people are conditioned (McDougall, 2009). The Cherokee maintained this conditioning into the 19th and 20th centuries.  In the 1800s, Chief Nimrod Jarrett Smith told James Mooney that the measure of a day’s walk was forty miles; fifty if you went a little after dark.  In the 1940s and 1950s Cherokee grandmothers walked to Waynesville to sell their baskets, and back to Cherokee in a day, a distance of forty miles. Maggie Wachacha, Beloved Woman, walked from Snowbird to Cherokee with her baby on her back, a distance of fifty miles, to serve as Cherokee language interpreter for Tribal Council.

In 1984, Cherokee men ran from Cherokee to Red Clay, 150 miles, carrying the eternal flame to the first joint Cherokee council since Removal.  These runners included John Standingdeer and Gilliam Jackson. Recently John Standingdeer played stickball at the Cherokee Fall Fair, and Gil Jackson hiked the Appalachian Trail, averaging more than twenty miles a day for several months.  The Cherokee Runners Club carries on this tradition by offering training and by coordinating races and events in the town of Cherokee.