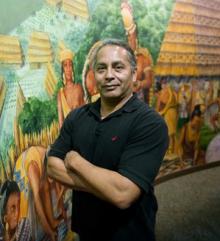 Cracking the Code to Speak Cherokee

"When I'm speaking Cherokee I feel our ancestors still hear us, and they are happy."

John Standingdeer Jr. grew up on the Qualla Boundary, proud of his people and their past. He learned to play stickball as a kid and became a cultural ambassador dancing with the Warriors of AniKituhwa.

“Everything about me was Cherokee except for the language,” Standingdeer said.

Standingdeer came from a family who spoke only English instead of the native Tsalagi or Cherokee.  And as a boy, he didn’t pay much attention to any fluent speakers on the reservation. As an adult, he tried immersion classes, but to Standingdeer, it was all about memorizing meaningless phrases, empty sounds that frustrated him.

There had to be an easier way to learn the language of his ancestors.

Standingdeer took advice from his father, a land surveyor. When the deeds or papers conflict over a piece of property, it’s best to follow the evidence on the ground, he said.

So, Standingdeer followed in the footsteps of Sequoyah, the man who invented a written language for the Cherokee in 1821.  Sifting through the 85 characters in Sequoyah’s syllabary, Standingdeer saw that the symbols in two columns could be boiled down to 16 basic sounds.

“Sixteen is easier to memorize than 85.”

As he tracked the sounds, he began to uncover the patterns of how words are formed in the complex language. “Every word is like a math equation, and this equation is the same for every word.” he said.

Now, Standingdeer has patented computer software and a revolutionary way to master an ancient language at risk of disappearing.

Even though Cherokee has been preserved in writing through Sequoyah’s syllabary, it still risks becoming a dead language, Standingdeer warned, if no one uses in everyday conversation.

Rob Daugherty, director of Cultural Programs for the Cherokee Nation in Oklahoma, estimated that only about 1 percent of the 31,500 members are fluent.  “We’re losing on the average 10-15 speakers a month,” Daugherty said at a February live-streamed conference dealing with problems with teaching Cherokee language.  “We’re not replacing speakers as our elders die.”

The problem may be more pressing among the Eastern Band, North Carolina descendants of Cherokee who fought the 1839 Removal to Oklahoma.

In 2005, a survey found 460 fluent speakers among the Eastern Band’s 13,000 enrolled members, most over the age of 50. Today there an estimated 200 speakers, again mostly elderly.

The Cherokee Preservation Foundation has spent some $4.5 million in recent years as the tribe mounted an ambitious 10-year plan to revitalize the language. Schools offer immersion classes for children trying to preserve the links for future generations.

While Western Carolina University has offered Cherokee classes since the 1970s, the university and tribe have worked closely since 2005 in a Cherokee Language Revitalization Project. WCU offers undergraduate and graduate classes ranging from elementary and intermediate Cherokee languages.

How you talk is how you conceptualize the world, To speak Cherokee is to see the world around you as a verb. Where English focuses on the world of things, or noun as objects and subjects, separate from verbs.

Cherokee words are more complex, building root verbs to convey meanings that it takes a whole phrase or even sentence to convey in English.

Standingdeer offered "black snake" as an example, which is "galegi" in Cherokee. "Looking at that Cherokee word, there is nothing that says 'black' or 'snake' in it," he said.

Instead "galegi" translates into English as "one who is climbing continuously."  All Cherokee words are built on root verbs with who is doing the action and the time element.

Once he found the root verbs, Standingdeer could see how to conjugate Cherokee words through the 17 verb tenses and the 10 persons compared to the six used in English

To double-check his hunch, he approached Barbara Duncan, a folklorist and education director at the Museum of the Cherokee Indian. Duncan has worked among the tribe for decades, but had always wrestled with learning the language, sitting through countless immersion classes.

“Easy and simple and Cherokee never went together in a sentence,” Duncan said. “It was like banging my head against the wall.”

But following Standingdeer’s idea, they began sifting through thousands of Cherokee words, following the sounds until the common roots between related words became apparent.

Soon, Duncan found herself able to converse in everyday Cherokee.

Standingdeer's discovery led to an algorithm and a nifty piece of computer software. In October, the U.S. Patent Office issued Standingdeer a patent for his idea for “Deconstruction and Construction of Polysynthetic Words for Translation Purposes.”

He has launched a company Flying Lizard Languages LLC, offering online classes at the learning site, Your Grandmother’s Cherokee.

John Grant Jr., an enrolled member and a cultural ambassador for the tribe, grew up in a family speaking Cherokee. He considers himself fairly fluent, but by taking Standingdeer’s classes for the past year, he now feels  more competent in teaching the language to others. “Hands down, it’s the best method I’ve come across. It makes our language easily understandable with the pattern behind the words.”

Before he started working with Standingdeer’s program, Grant figured he had the comprehensive skills of a 4- or 5-year-old as far as using Cherokee. “Now, I think I’m at the level of a teenager. I’ve just learned more in the class than I have anywhere else.”

If the Cherokee don’t speak the language, they have only themselves to blame, Grant said. “It’s 2016, and there ain’t nobody who will put soap in our mouth for speaking it.”

Preserving Cherokee as a language or any other indigenous language also saves a unique perspective on the world Duncan said. Cherokee grew out of the mountain landscape of Western North Carolina, and the lilting sounds of fluent elders reminds her of the rise and fall of the mountains.

Standingdeer believes the compound constructions aren’t only native to Cherokee but may be key to other indigenous languages across North America.

For now, mastering his native tongue has been gratifying.

When he’s out in the woods where the Cherokee have roamed for centuries, Standingdeer sees in a new way with an old language. “When I’m speaking Cherokee, I feel our ancestors still hear us and they are happy.”