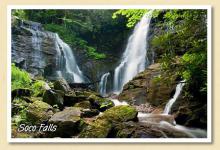 From Wiggins Blackfox, Inoli--One of the origins of the word Soco

From Wiggins Blackfox, Inoli--One of the origins of the word Soco

Long ago when the world was young (it sounds better when you say that) and the A-ni-yv-wi-ya had very few enemies other than other tribes. One of the ways that their need for cooking oil was obtained was to take the nuts of certain nut bearing trees, shell them and make pulp out of the edible part. Then the pulp was used for oil, Go-i. One of the nuts that was used was the Hickory nut which came from the tree called Wa-ne-i. The nut and the tree are from the same origin but have different names. The nut is called So-hi.

The A-ni-yv-wi-ya sometimes had to travel (or walk) up to a place they called Ha-lu-nv-i, which is a  shortened word of  Du-ni-ha-lu-gv-hi  which is a word for ambush. During the Civil War, or the War of Northern Aggression, the Cherokees would ambush their enemies at this place which the English named Soco Gap. There they gathered their hickory nuts (which they called So-I or So-hi). Thence the word So-I, (Hickory) Go-i (oil) or in English: Soco.