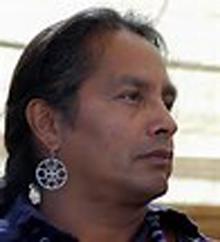 My dad used to say, water seeks its own level. If you’re lost in the mountains, follow a stream downhill, and it will come to a bigger stream, and will lead you out, because the water finds the best way down the hill. Trails are the same way. When I was a kid, I used to watch how the cows would make trails around the side of the hill. And they say the interstate highways follow the old buffalo trails. And I’ve made trails—I’d walk through the woods and walk back the same way.

Or when we were kids—the boys were supposed to play outside. We’d stand at the top of the bank and roll rocks, just to watch them roll down the bank. Or work a clod loose with my foot and watch it roll. And I realized the dirt does the same thing as the water. It seeks its own level.