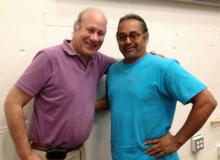 We are explaining it-- Deyostosisiha

We are explaining it— Deyostosisiha

Last Thursday we--John “Bullet” Standingdeer and Barbara R. Duncan—traveled to Athens, on the edge of the old Cherokee homeland, to give a talk at the University of Georgia.  Several students there are trying our method.  In September we spoke at the University of North Carolina at Asheville.

We appreciate these opportunities to explain what we have done.  After John Standingdeer said,  “There has to be a pattern,” we found the patterns in the Cherokee words.  We looked at the CHEROKEE patterns, the “inherent indigenous logic” of the words.  And when we did the language became very simple—easy to learn and easy to teach.

We looked at ALL the Cherokee verb roots—go, live, hungry, swim, about six hundred of them, with all their conjugations—and did our own analysis of where to break the words apart.  Scholars have been doing this, each in their own way, with their own system of spelling Cherokee, since 1819.

Every scholar has a different explanation, and after you learn his or her unique system of spelling, then you have to learn his or her grammatical rules. If you want to understand this, read their disserations, try to follow them, and then make a comparison. Floyd Lounsbury said, in his dissertation at Yale in 1948, that after attempting four different ways to understand the process, he chose one way to break Oneida verbs apart; he stated it was not perfect, but it was one way, and other scholars could do it another way.

When we broke the words into parts following the CHEROKEE patterns (not English grammar, not linguistic categories) we found that their patterns are so regular they can be programmed to automatically conjugate on the computer.  More important—they are so regular that students can actually learn all ten persons and twelve common tenses that are the language, the way the grandparents spoke it.

No one since 1850 thinks language works like this.  No one today can do this with Cherokee or other American Indian languages.  That’s the discovery.  Thanks for listening.