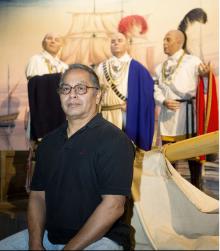 Why I'm Learning Cherokee, First Language of Our Landscape by Dale Neal

"I speak a little Cherokee."

It's intimidating introducing yourself to a roomful of strangers with words that seem to bunch up in your mouth, rather than trip off your tongue, but everyone was game. "Osda," or "Good," the students encouraged each other.

The group included a firefighter from Florida, an academic from Boston, a retired Navy veteran, enrolled members of the Eastern Band of Cherokee Indians, and me, a curious journalist, all intent on learning more about Western North Carolina's first language.

For the past few months, we've been taking online classes in Your Grandmother's Cherokee, a revolutionary method of learning the ancient language. Barbara Duncan, education director at the Museum of the Cherokee Indians, invited students last weekend to her home in Whittier, a farmhouse with expansive views of rolling pasture and blue sky, the perfect setting to practice a little Cherokee.

It's one thing to see the words created on a computer screen. It's another to hear the words roll off the tongues of living fluent speakers, like Gilliam "Gil" Jackson.

Jackson grew up and still lives in Graham County's Snowbird community —.among the Eastern Band's most traditional strongholds. For the past decade, he's taught a language camp for the youngsters in Snowbird. His students are so good, he can drill students to add and subtract using Cherokee. Next year, he'd like to teach algebra and geometry in Tsalagi.

But Jackson admits it's an uphill battle. There are only about 100 to 200 fluent speakers among the tribe's 15,000 members, mostly elderly. He knows only of about 50 youngsters who are serious about learning the language. Jackson calls it being hungry.

Why learn to speak a language that has been seriously in decline in the past few generations?

That's a little like asking what is the use of the trillium wildflowers that will grow on mountainsides, well away from the trails where humans might stop and admire them. Trillium, by the way, has an interesting name in Cherokee or Tsalagi that means thunder and lightning.

And no, I have no Cherokee blood that I'm aware off. I hail from hearty Scotch-Irish and German stock, a long line of dirt farmers who settled in the Carolinas and the Appalachians. But I am curious about how language and landscape are intertwined. People talk differently in our parts. And not so long ago, the King's English was an alien sound in the mountains.

To talk the talk of the Tsalagi is to walk a ways in the moccasins of a proud people, to catch a glimpse of the way they saw the world around them.

The Cherokee left their names on the land they inhabited for centuries before the arrival of Europeans — from Swannanoa to Cullowhee, Cataloochee to Tusquittee, which means "where the waterdogs laughed."

Asheville was once called Tokiasdi, or the "place where they raced," perhaps referring to canoe races at the confluence of the French Broad and Swannanoa rivers.

Cherokee is among the world's 7,000 languages, but linguists estimate half of those languages may be extinct by the end of our 21st century. A language may be dying off every 14 days around the world, UNESCO has reported.

But the people I sat with Saturday want to make sure their language doesn't die. Even though Sequoyah devised a syllabary to document the language, a first among Native American tribes, that still doesn't make Cherokee a living language if no one is using it on a daily basis to joke with their kids, talk to their relatives, or even dream at night.

Your Grandmother's Cherokee is the brainchild of John "Bullet" Standingdeer, who grew up on the Qualla Boundary. As an adult, Standingdeer was secretly ashamed he couldn't memorize and master Cherokee.

Ask a fluent speaker for help and they can only repeat the words they learned as children. They can't say how the words change tense or meaning. "Sometimes it sounds like the difference between 'thing-a-ma-bob' and 'thing-a-ma-jig," Troy Provenzano, a firefighter from Florida, laughed.

But Standingdeer kept searching for the logical patterns, and discovered while the words changed, certain sounds or syllables remained constant, offering a clue to an underlying structure.

For Standingdeer, it was like locating the Rosetta Stone hidden among all those syllables.

Cherokee actually conjugated its long verbs consistently and logically enough for a computer algorithm to predict the forms. Standingdeer applied for and won the patent for that algorithm that is the linchpin to the Your Grandmother's Cherokee website.

Cherokee's polysyllabic words work as complete sentences rather than individual nouns and separate verbs. And Cherokee is much more precise and tactilely nuanced than English and European languages. There are different forms of the word to give for example, if you are handing over a cup of liquid, a bowl, a pencil, or a piece of paper.

And "give me" would have a different form if I asked for that ladybug you plucked from a flower petal.

It's also interesting to discover what words the Cherokee didn't traditionally use, like "respect."

Jackson said respect was something the Cherokee would assume in a person's behavior, not just to pay lip service. Likewise, there is no word for "please" as in "please, help me." The Cherokee assume if you ask for help, you will be given it. No need to beg.

Jackson applauded the Your Grandmother's Cherokee system. "If you can teach a methodology, then second language speakers will just fly," he said.

Eva Garroutte grew up in Oklahoma as an enrolled member of the Cherokee Nation. She has spent years listening to fluent speakers, but she couldn't get the hang of it until she encountered Standingdeer and Duncan's system.

Her Cherokee name is "Dawa" or "flying squirrel" - the animal that can negotiate between the world of mammals and the sky of birds. And Your Grandmother's Cherokee works like that bridge between fluent speakers and adult learners, said Garroutte, now a Boston College sociologist.

"You can figure out something that your ancestors thought centuries ago because they left traces in the language," she said.

"It's such an elegant language that does all these cool things. You can spend your life learning it," Garroutte said, who can now carry on meaningful conversations.

There are other clues as how the Cherokee viewed people as well as the landscape. Anger is a passive construction, something that happens to you like getting sick. Among the emotions as expressed in Cherokee, happiness doesn't just happen. It's an active verb along with being thankful.

The familiar world of Western North Carolina looks a little different to me these days with new words to roll off my tongue, and how the lilt of Cherokee mimics the mountains, the rise and fall of ridges and coves.

My favorite word, so far, in Cherokee?

Agwasgwanigoska. "I am being amazed."

With the Citizen-Times since 1983, Dale Neal reports on People and Place. He is the author of two novels.