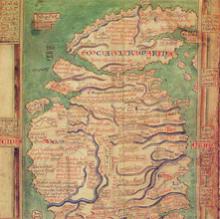 English - the other problem, part 1

Many people try to teach Cherokee by comparing it to English. This is like using parts from your old Edsel to try to fix your Ferrari. (English being the old Edsel that’s already had parts from different cars rigged up to make it run. Cherokee being the sleek high performance Ferrari.)

The English language began with the indigenous Celtic people of the British Isles, whose descendants are the Scots, Irish, and Welsh. About 500 AD they were conquered by the Anglo-Saxon tribes, who spoke dialects of German. Anglo Saxon became the dominant language. When the Normans conquered England in 1066 their dialect of French became the dominant language, absorbing German words but few Celtic words. By the time of the Renaissance, about 1500, the English language had combined French and German, and with the invention of the printing press began to incorporate words from the ancient Greeks, whose writings were about 2000 years old. Then about 1600, Shakespeare and the translators of the King James Bible used words from all these sources (and made up some of their own) to create the English language as we know it today.

This is why the rules of English grammar have so many exceptions and are so confusing. “English” incorporates Celtic, German, French, Latin, and Greek words, reflecting the history of the British Isles. Each language has its own rules for spelling and grammar.

The Cherokee language has its own system of patterns. It has its own inherent indigenous logic.